Training in Competition in St. Vincent

On 20th April 2016, was celebrated a Training in Competition in Kingstown (St. Vincent), with the participation, on one side, of the Government officers from the Ministry of Foreign Affairs, Trade, Commerce and Regional Integration; the Ministry of Finance; the Ministry of Economic Planning and the Ministry of Legal Affairs. On the other side, also attended to the meeting representatives of the local non-Government consumer agency, the local newspaper, the telecoms regulatory authority and the business sector.

Mrs. Okolo John-Patrick, Trade Officer, Ministry Foreign Affairs, Trade, Commerce and Regional Integration welcomed all of the participants to the workshop. Mr. Elsworth John, the country’s Ambassador to CARICOM gave brief opening remarks in which he noted that some participants had already benefitted from a workshop on competition law and policy held in St. Vincent and urged them to acquire a deeper understanding of competition law and policy by engaging in more extensive dialogue.

The Training Course is an output of the CARIFORUM/EU Capacity Building Project which is funded under the 10th EDF.  The project’s overall objective is to support CARIFORUM Member States’ beneficial integration in the world economy. Specifically, it seeks to help member states to implement their EPA commitments in the areas of Competition, Procurement and Customs and Trade Facilitation. A consortium led by Equinoccio (Spain) which includes the London School of Economics, SGS and Maastricht School of Management is implementing the project. 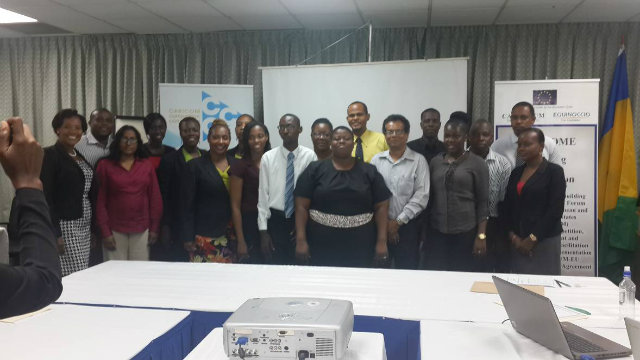