On 17th March 2016, seventy persons attended a capacity building workshop on Competition Law at the Arthur Chung Convention Center at Liliendaal, East Coast Demerara. Attendees included representatives of the Public Utilities Commission, the Private Sector Commission, the Guyana Revenue Authority and several other organizations for which issues related to competition law and policy have a direct and practical relevance.

The objectives of the sessions were, to impart a basic understanding of the competition regime and to sensitize stakeholders of their role in achieving the successful enforcement of competition law.

The workshop’s facilitator, Mr. Barry Headley, senior economist at the Caricom Competition Commission (CCC), provided participants with a broad understanding of the competition regime in CARIFORUM, including its benefits to the Guyanese public, such as improvements in consumer welfare in terms of access to a wider choice of products; better quality products; and reduced product prices. Attendees also gained insights into anti-competitive business conduct, its negative impact on Guyanese consumers and the country on the whole, and were updated on the progress of CARIFORUM countries in implementing competition laws required under the Revised Treaty of Chaguaramas. Guyana enacted competition law in 2010 and began its enforcement in 2012.

Mr. Headley noted that CARIFORUM states, like Guyana, need to develop a “culture of competition” in which citizens not only understand the benefits of competition and the country’s competition laws but also demand compliance with these laws.  He charged the attendees to be vigilant in identifying anti-competitive practices in the local business environment and to report these to the CCC.

This workshop is an output of the CARIFORUM/EU Capacity Building Project which is funded under the 10th EDF (European Development Fund). The overarching objective of this project is to support the beneficial integration of CARIFORUM States into the international economy and more specifically, to contribute to the effective implementation of the CARIFORUM-EU Economic Partnership Agreement with particular obligations relating to Competition, Public Procurement and Customs and Trade Facilitation. 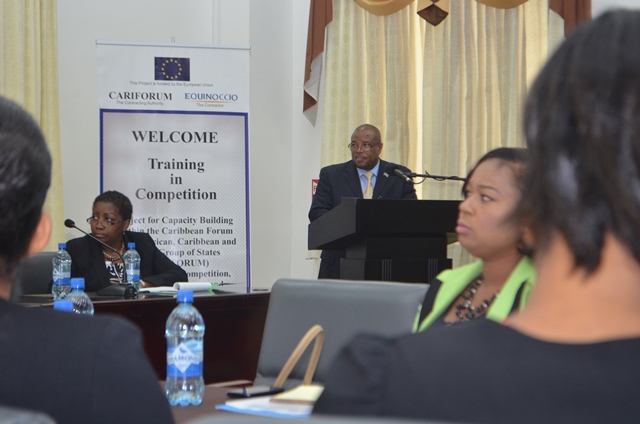